While my memories are still fresh, here is a report of this week of code sprinting. First, a big thanks to Olivier Courtin for organizing this event, to all sponsors that brought up the money to make it happen and to the Mozilla Foundation for hosting us in the most scenic coding venue I've ever seen. 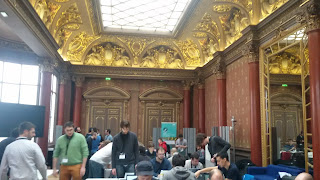 As expected, I mostly concentrated on GDAL work. My main tasks were related to polishing and extending the work initiatied by Ari Jolma for the support of the "M dimension" of geometries, M standing for Measurement, a numeric property attach to each point/vertex and that can encode different attributes: time, lengths, or any other interesting property beyond x, y and z....
Those good old shapefiles are still a bit fancy since they do not really distinguish between XYZ and XYZM geometries up-front. In fact as soon as you have a Z component, the Shapefile specification requires a M value to be encoded, even if not used. There's consequently a nodata value (any value lower than -10^38) for such cases. As M geometries are a bit esoteric, we want to avoid to report them when not being used. Consequently a heuristics has been added to the shapefile driver to probe by default the first shape in the file and checks if it has meaningful M values. If not, the layer geometry type is just declared as being XYZ. This should help with backward compatibility of software using GDAL. Implemented per r33538 and r33539.
The support of M in the CSV driver was more straightforward (r33544) due to the bulk of the work being of course done in the WKT importer/exporter.
Regarding the GeoPackage driver, the main need was to be able to parse correctly geometry headers for XYM or XYZM bounding boxes that may be found. The main difficulty was to test that since OGR itself just generates XY or XYZ bounding boxes, so editing hexadecimal WKB was needed. Somewhat amusing with a broken laptop screen. Anyway, was done through r33551
Support for M geometries in SQLite/Spatialite required a number of small changes scattered through the driver code base, and new tests for the various variants (regular geometries vs compressed ones). The upgrade of this driver makes it also possible to use XYM/XYZM geometries with the SQLite SQL dialect usable by all other drivers. Implemented per r33554
The upgrade of the FileGDB and OpenFileGDB drivers gave me some headaches as it turned out the support of writing M values in the older FileGDB SDK 1.3 was broken. After upgrading to v1.4, things went much more smoothly. Support for M with FileGDB v9.X. Implemented per r33563 . For the nostalgics, the PGeo driver should also benefit from those changes, although this wasn't tested.

On the MapServer front, in the middle of many other things, Thomas Bonfort merged in time for MapServer 7.0.1 an older pull request from mine that I had forgotten to support 64 bit integer fields that may now come with GDAL 2.0. I also backported a fix to handle WMS TIME on contour layers, in time for MapServer 6.4.3.

Aside for my own coding, I enjoyed spending time with other developers to help them on their GDAL tasks. With Rob Emmanuele, we tried to figure out how to make the "driver" that handles files accessible through HTTP/HTTPS to better report errors, especially on Amazon S3 storage, so that upper library or application layers can better deal with them. In particular, you want to be able to distinguish an inexting ressource (typo in the URL for example), from a valid one but for which you have not specified the right credentials. This turned out to be much more difficult as I would have myself anticipated, since there are a lot of situations where we want errors to accessing files to be silent (for example when drivers probe from potential "sidecar" files that accompany main files. Think to the .prj, .wld, .aux files), and there's no way in the current design to know when to be verbose or not. Rob finally came with a design of a file system error reporthing mechanism, that is not verbose by default, but that may be queried by the code paths that want to report errors in a verbose way. This is still work in progress, but hopefully Rob should be able to polish it to be included in the upcoming GDAL 2.1 release (feature freeze at the end of this month).

With Yann Chemin, we had quite of fun exploring how to better support the catalog of spatial reference systems published by the IAU (International Astronomical Union) that describes the SRS used for other planets and satellites. In particular, we discovered that some of those SRS used the Oblique Cylindrical Equal Area (OCEA) projection. This projection is supported by proj.4 (thanks to Howard Butler for designing a modern website for this not always sexy but so fundamental piece of software that is proj.4), but not by the OGR Spatial Refrence (OSR) component of GDAL itself. The main challenge to make it available through OSR is to be able to map the proj.4 parameters of the projection to parameter names in WKT. Documentation to do that is generally scarce, and we ended up opening the bible of the projection experts, that is to say "Map Projections - A Working Manual", by John P. Snyder, USGS Professional Paper 1395, whose proj.4 is mostly the translation in C code. The book gave some light at its page 80 regarding the OCEA projection. The interesting part of OCEA is that it comes with 2 variants... The gist of the support is now in this pull request, with some more work and research to clarify the remaining mysteries. In the meantime, GRASS can now benefits from IAU codes (r67950 and r67951)

Regine Obe also worked on improving the ODBC support in OGR: build support of Windows ODBC libarries with the mingw64 compiler, ability to support a large number of columns in tables.